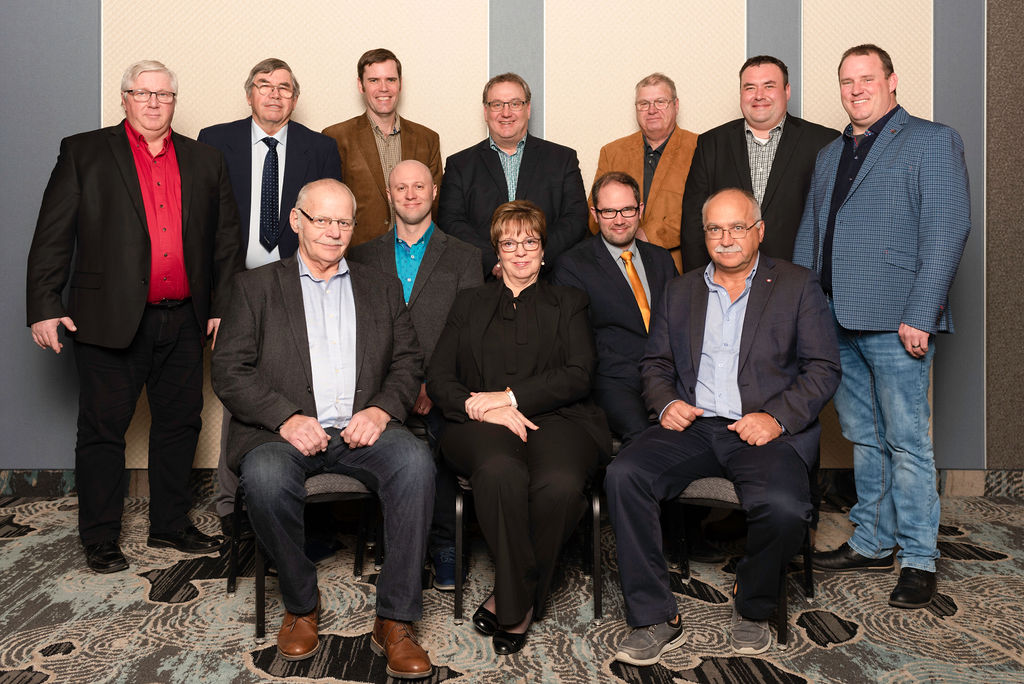 The Agricultural Producers Association of Saskatchewan is governed by a twelve member Board of Directors. Two APAS Representatives from APAS member RMs are elected to sit on the Board from each of APAS' six districts. Board elections take place every year at the APAS Annual General Meeting in November.

Each year, the Board of Directors elect from their number an Executive Committee, consisting of a President and two Vice-Presidents.

Todd Lewis' family established the family farm in 1904. Todd is the fourth-generation farmer and continues to operate the farm in the Gray district south of Regina. His father Don, brother Rod, and nephew Brendan are involved and together they produce mixed grains, oilseeds and pulses.

Todd is married to Terry and they have one daughter, Kim.

Todd is Division Three councillor for the RM of Lajord #128 starting in 2003 and has been an APAS Representative since 2006. In 2009 he was elected to the Board of Directors and in 2011 was elected to the position of vice-President. In the fall of 2016 Todd was elected APAS President. He is a member of the Finance Working Committee and ex-officio member of all six APAS policy committees.

Todd represents APAS on the Canadian Federation of Agriculture Board. Todd is also a Board Member of the Western Grains and Research Foundation and is a Member on the Investment Committee. Todd also is APAS’ Delegate to the Saskatchewan District of The Co-operators and was on the steering committee for the formation of the Saskatchewan Barley Commission. Todd sits on the Sask Chamber of Commerce - Environment Committee.

Todd’s community involvement currently includes Gray Rink Board, Riceton Volunteer Fire Department Board and is a volunteer firefighter. He is also on the Potash Committee for the RM Council. Todd also coached high school football for a number of years in Regina.

Ian Boxall is the fourth generation and third youngest son to live on the home quarter that was homesteaded in 1904 by his great grandfather. Ian and his wife Lisa, together with his brother and sister-in-law, farm mixed grains, oilseeds and pulses in the Tisdale area.

Ian was elected councillor for division 3 of the RM of Connaught #457 in 2012. As a councillor, Ian sits on the Tisdale Health Trust committee and the Tisdale volunteer fire department.

Ian went through the Youth Leadership and Mentorship program with APAS and in the spring of 2015 became the representative for the RM of Connaught. In December 2015 Ian was elected to the APAS Board of Directors and in 2016 elected as a Vice President. Ian sits on the Crops and Transportation, and Young APAS Producers policy committees and the Recruitment and Retention working committee.

Bill Prybylski grew up on the family’s mixed farm in the Willowbrook area west of Yorkton. After working several years as a welder in Estevan, he moved back to take over the farm. In 2007 the farm was incorporated. Along with his son, his brother and two nephews, they crop 11,000 acres of grains, oilseeds and pulses and run a 300 head commercial cow/calf herd. Bill has four children all of whom are involved in agriculture to some degree.

Bill served on RM of Garry #245 council for ten years and in 2015 was appointed as APAS Representative. He sits on the Economic and Trade Committee and the Governance Committee. At the 2017 AGM he was elected as one the Directors for District 4, and in 2018 was elected to the position of APAS Vice President.

Bill is very involved in his community having coached his kids in hockey and baseball. He has sat on the District 12 ADD Board and the East Central Research Foundation Board. Currently, he sits on the Board of Directors for the Yorkton Co-op. Bill is also very involved with the Knights of Columbus and sits on his Church’s Parish Council.

An APAS representative for RM #95 (Golden West) since 2016, Wanda Reid was elected to the APAS Board for the first time in 2019. In addition to representing District 1, she also serves as the APAS delegate to the Co-operators, and as a member of the Livestock and Rural Life committees.

Wanda has farmed grain with her husband Richard since 1978 on their Century Farm near Corning, SK. Her two adult children and six grandchildren remain nearby, with her son farming grain and cattle just across the road. Wanda and Richard are active in their son’s operation, and in supporting his three children in their Beef 4-H.

An avid horse person, Wanda keeps her daughter’s horses and supports both her daughter and her three children in their pursuit of barrel racing.

Wanda is a keen gardener and is also active in her community as a member of the Corning Community Players.

Steven is a fourth generation farmer from Moosomin, SK. Steven, his wife Jen and their four children, farm mixed grains and oilseeds and run a cow-calf operation.

Steven participated in the APAS Youth Leadership and Mentorship program in 2016 and was elected to the APAS board in 2018. Steve sits on the APAS Young Agricultural Producers and Crops and Transportation committees and represents APAS on the Western Grain Standards Committee.

Terry Anthony was born and raised on a farm in the Moose Jaw area. He ran cattle with his Dad and brother until 1990 when he began his own operation and added grain production to his farm. Terry worked at a number of off-farm jobs to help build his farming operation. In 2001 he resigned from a 16-year career with CPR as an engineer.

Terry was on council for the RM of Baildon #131 for 20 years, first as a Councillor and then as Reeve. He helped establish the Moose Jaw River Watershed Stewards which Terry chaired until he resigned from the Board in 2010. Terry became the APAS Representative for the RM in 2015 and in December 2015 was elected as a Director for District Two. He sits on the APAS Livestock Policy Committee.

Terry and Pam were married in 1976. They continue to farm with their sons south of Moose Jaw. Terry and Pam have three children and three grandchildren.

Devin Harlick, a fifth-generation Saskatchewan farmer, began farming and ranching at the age of 16. Though his family originally homesteaded in Montana, they moved to Saskatchewan in 1905. Devin and his brother now own their family’s mixed farm located in the Cypress Hills. Devin also farms with his in-laws near Herbert where they grow mixed grains, canola, and pulses.

In 2009 he received his Diploma in Agriculture from the University of Saskatchewan before moving back to the Cypress Hills to start farming with his brother and working as an environmental consultant for oil and gas companies. Devin later returned to university in 2016 to finish his Bachelor of Science in Agriculture.

Devin started working with APAS in 2015 through the Youth Leadership and Mentorship program. He became an APAS Representative for the RM of Piapot #110 in 2016 and was elected to the APAS Board of Directors in 2018. He is a member of the APAS Land and Environment and YAP Committee.

Devin currently works full time as an Agrologist at a crop inputs retail in Swift Current and is a part-time student at the University of Saskatchewan. He and his partner live in Herbert. They both love agriculture, traveling, and their hobbies.

Donavon was born and continues to farm in the Leroy area. He now operates a grain farm of 1800 acres and operates a cow/calf operation just south of Leroy with his wife Pearl and son Cody.

Donavon and Pearl have three children; Whitney, Cody and Matthew, and five grandchildren.

Donavon has been active in the community. He has been on several boards including Leroy minor hockey, Leroy curling club, Midway Co-op, Leroy Credit Union, and the local church board. Donavon was also a delegate for the Saskatchewan Wheat Pool for 12 years.

Donavon has been an APAS Representative for the RM of Leroy since 2007, was elected to the APAS Board of Directors in 2012 and served as Vice President in 2015/2016. Donavon sits on the APAS Livestock committee. He has also represented APAS at a number of beef and livestock conferences and events.

Mickey Palfy was born and raised on the farm near Viscount. His farming career started in 1971 with the purchase of a section of land from a neighbour. Mickey farmed with his father until his retirement in 1975. This third generation farm has produced a variety of cereals, pulses, oilseeds and forages.

In 1975 Mickey married his wife Monica and they have four sons: Ryan, Keith, Mickey Jr. and Jeremy. Mickey and Monica have five grandchildren.

Mickey has been involved with APAS as a Representative since 2010 and as a Board member since2012. Mickey serves on the Crops and Transportation policy committee and the Finance and Recruitment and Retention working committees. He represents APAS at the Canada Grain Council whose activities include the Grains Roundtable and the Canadian Global Crop Symposium.

Mickey served as a delegate for the United Grain Growers. He also served on the school board for the St. Alphonse School in Viscount and the local recreation board.

Scott grew up on a grain farm north of Maidstone, Saskatchewan. In 2002 he received his Diploma in Agriculture from the U of S and moved back to the farm to start farming full time with his parents. In 2007, he assumed the decision making role on the farm, with continued support from his family and friends.

Since Scott started farming in 2002, the Owens farm has undergone periodic expansion. They currently grow Soft White and CPS wheat, canola, peas, barley, and hay. The heavy oil industry is very active on their land as well, which led Scott to becoming well versed in Surface Rights legislation.

Scott became the APAS representative for the RM of Eldon #471 in April of 2015. He was elected to the APAS board in November 2017 and also sits on the APAS Land and Environment Committee. He is a past participant of the APAS Youth Leadership and Mentorship program.

Scott and his wife, Mary Theresa, reside on the farm with their two children ages 7 and 9 and are all actively involved in the surrounding community.

Jeremy Welter was born in the area and raised on the family farm near Kerrobert. He is a fourth-generation farmer, a husband, a father and a small business owner.

Welter has served as the APAS representative for the RM of Mariposa since 2013, and in addition to serving on the APAS Board of Directors for District Six, has also served as chairperson for the association’s Economics & Trade committee.