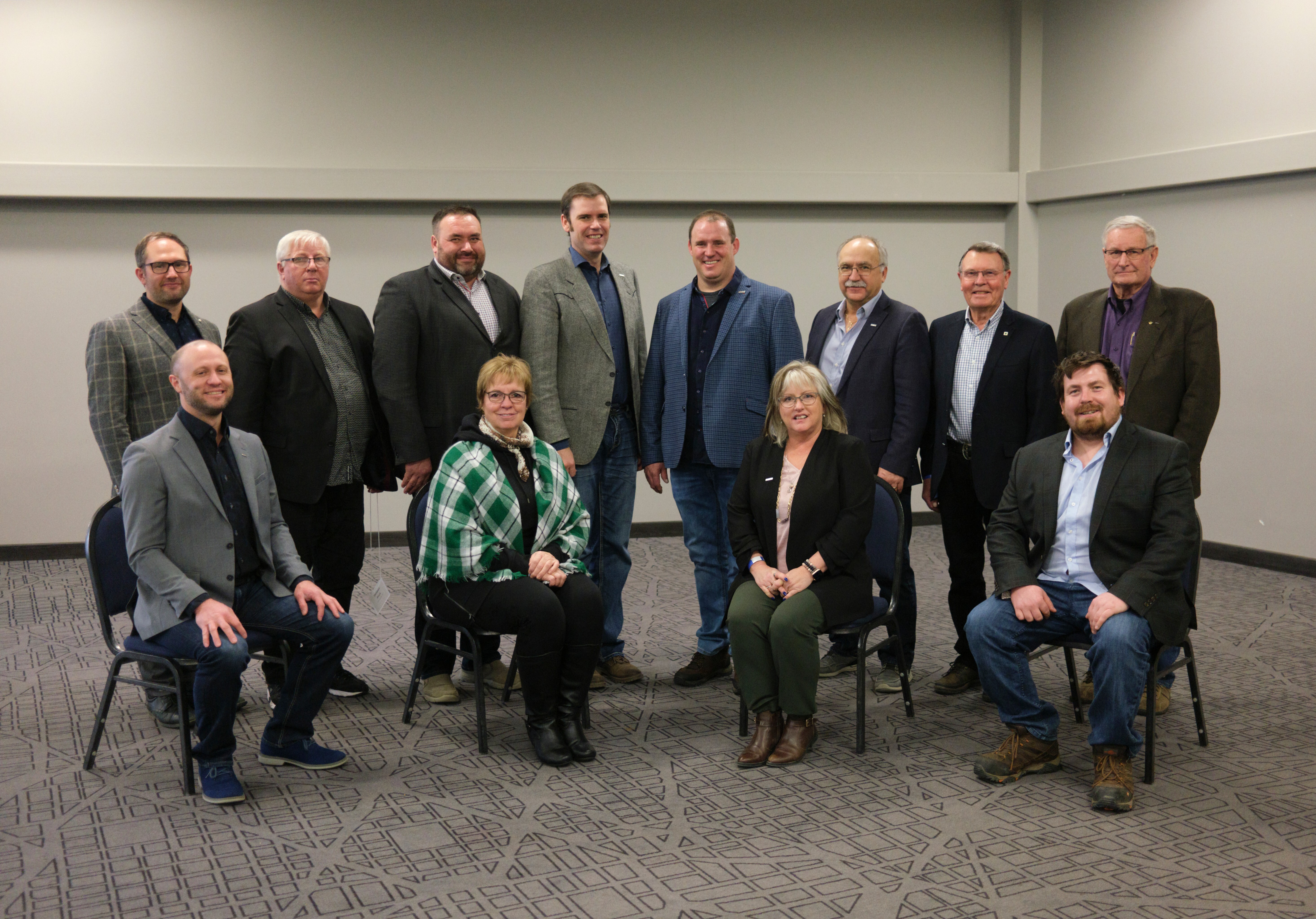 APAS is governed by a twelve member Board of Directors. Two APAS Representatives from each of APAS' six districts are elected to Board. Board elections take place every year at the APAS Annual General Meeting.

Each year the Board of Directors elect from their number an Executive Committee, consisting of a President and two Vice-Presidents.

Ian Boxall is the fourth generation and third youngest son to live on the home quarter that was homesteaded in 1904 by his great grandfather. Ian and his four children farm mixed grains, oilseeds, and pulses in the Tisdale area.

Ian started his time at APAS through the Youth Leadership and Mentorship program with APAS and in the spring of 2015, and then became the representative for the RM of Connaught. In December 2015 Ian was elected to the APAS Board of Directors. In 2016, he elected as a Vice-President, and in 2021 he was elected President.

Bill Prybylski grew up on the family’s mixed farm in the Willowbrook area west of Yorkton. After working several years as a welder in Estevan, he moved back to take over the farm. In 2007 the farm was incorporated. Along with his son, his brother and two nephews, they crop 11,000 acres of grains, oilseeds and pulses and run a 300 head commercial cow/calf herd. Bill has four children all of whom are involved in agriculture to some degree.

Bill served on RM of Garry #245 council for ten years and in 2015 was appointed as APAS Representative. He sits on the Economic and Trade Committee and the Governance Committee. At the 2017 AGM he was elected as one the Directors for District 4, and in 2018 was elected to the position of APAS Vice President.

Bill is very involved in his community having coached his kids in hockey and baseball. He has sat on the District 12 ADD Board and the East Central Research Foundation Board. Currently, he sits on the Board of Directors for the Yorkton Co-op. Bill is also very involved with the Knights of Columbus and sits on his Church’s Parish Council.

Scott grew up on a grain farm north of Maidstone, Saskatchewan. In 2002 he received his Diploma in Agriculture from the U of S and moved back to the farm to start farming full time with his parents. In 2007, he assumed the decision making role on the farm, with continued support from his family and friends.

Since Scott started farming in 2002, the Owens farm has undergone periodic expansion. They currently grow Soft White and CPS wheat, canola, peas, barley, and hay. The heavy oil industry is very active on their land as well, which led Scott to becoming well versed in Surface Rights legislation.

Scott became the APAS representative for the RM of Eldon #471 in April of 2015. He was elected to the APAS board in November 2017 and also sits on the APAS Land and Environment Committee. He is a past participant of the APAS Youth Leadership and Mentorship program.

Scott and his wife, Mary Theresa, reside on the farm with their two children ages 7 and 9 and are all actively involved in the surrounding community.

An APAS representative for RM #95 (Golden West) since 2016, Wanda Reid was elected to the APAS Board for the first time in 2019. In addition to representing District 1, she also serves as the APAS delegate to the Co-operators, and as a member of the Livestock and Rural Life committees.

Wanda has farmed grain with her husband Richard since 1978 on their Century Farm near Corning, SK. Her two adult children and six grandchildren remain nearby, with her son farming grain and cattle just across the road. Wanda and Richard are active in their son’s operation, and in supporting his three children in their Beef 4-H.

An avid horse person, Wanda keeps her daughter’s horses and supports both her daughter and her three children in their pursuit of barrel racing.

Wanda is a keen gardener and is also active in her community as a member of the Corning Community Players.

Steven is a fourth generation farmer from Moosomin, SK. Steven, his wife Jen and their four children, farm mixed grains and oilseeds and run a cow-calf operation.

Steven participated in the APAS Youth Leadership and Mentorship program in 2016 and was elected to the APAS board in 2018. Steve sits on the APAS Young Agricultural Producers and Crops and Transportation committees and represents APAS on the Western Grain Standards Committee. 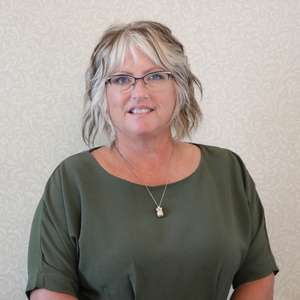 Bev Pirio has been an APAS Representative for the R.M. of Laurier (#38) since 2016. She was elected to the APAS Board of Directors for the first time in 2021.

Bev and her husband Rich produce grain and oilseed crops on their farm near Radville, SK. Bev and Rich have been married for 33 years and have two sons, Casey and Brett. Casey is slowly taking over the farm operation while Brett specializes in Information Technology.

Bev is an active member of her community, having sat on the R.M. council since 2011. She is also a member of multiple boards and committees.

Bev owned and operated an oil field rentals company for 15 years and has a background in Early Childhood Education.

Bev is a very proud owner of two dogs, Zoey and Turbo, previously featured in the Farmer's Voice magazine.

Bev loves books, and can often be found listening to an audiobook while in the combine or when baking, which is one of her favourite pastimes.

When Bev and Rich are not on the farm, they enjoy spending time at Mainprize Regional Park in the summer months and are avid travellers in the winter months.

James farms one mile west of the village of Bateman in the RM of Gravelbourg (#104) with his eldest of four children. He started farming rented land in grade 11 and worked winters surveying and engineering for the provincial government, later working for the Alberta oil industry as a survey manager. James and his wife moved to their farm in 1972 and went into a mixed operation with cattle, cereals, and oilseeds.

After his wife passed away and his children attended university, James began studying at the University of Manitoba where he earned an agriculture business degree with a major in marketing. He is also just a few elective credits short of a masters degree in economics, all while still farming.

Aside from farming and APAS activities, James was a Councilor for the RM of Gravelbourg (#104), a chairman of the Wood River Board of Education, and a member of agrologist institutes in Saskatchewan, Manitoba, and Alberta, as well as the Agriculture Institute of Canada. When he has off-time, James enjoys golfing, travelling, and attending Swift Current Broncos hockey games.

Devin Harlick, a fifth-generation Saskatchewan farmer, began farming and ranching at the age of 16. Though his family originally homesteaded in Montana, they moved to Saskatchewan in 1905. Devin and his brother now own their family’s mixed farm located in the Cypress Hills. Devin also farms with his in-laws near Herbert where they grow mixed grains, canola, and pulses.

In 2009 he received his Diploma in Agriculture from the University of Saskatchewan before moving back to the Cypress Hills to start farming with his brother and working as an environmental consultant for oil and gas companies. Devin later returned to university in 2016 to finish his Bachelor of Science in Agriculture.

Devin started working with APAS in 2015 through the Youth Leadership and Mentorship program. He became an APAS Representative for the RM of Piapot #110 in 2016 and was elected to the APAS Board of Directors in 2018. He is a member of the APAS Land and Environment and YAP Committee.

Devin currently works full time as an Agrologist at a crop inputs retail in Swift Current and is a part-time student at the University of Saskatchewan. He and his partner live in Herbert. They both love agriculture, traveling, and their hobbies.

Don Connick lives on his family's century farm south of Gull Lake, and he's been part of APAS since 2001 when he was elected as the Representative for the R.M. of Carmichael (#109).

He was later elected to APAS' Board as a Director for District 3.

Don has served in the role of interim president and as vice president on two occasions for APAS. He's also been on the APAS committees for Livestock, Economics and Trade, and Rural Life.

For many years Don also served as the APAS Director for the Canadian Agricultural Human Resource Council.

Don has a degree in Agriculture from the University of Saskatchewan and has earned credits for post-graduate classes from Colorado State University. For several years he lived in Manitoba, where he worked as an Ag Rep for Manitoba Agriculture. Don also served as Manager of the conservation district in the Boissevain, Manitoba area.

Don and his wife Norma eventually returned to his family farm, where they took over the operation. Together they raised their two daughters and now have three grandchildren. The couple is happy to live close to their family and watch their grandchildren grow.

Don has stepped back from many of the farm operations but continues to raise cattle on their pasture during the summer months.

Don has a love for the native prairie, its landscape, birds and wildlife.

In his spare time, Don enjoys photography, and he is also an avid writer of both fiction and non-fiction. Don enjoys reading and learning about Western Canadian history, which influences many of his stories.

Donavon was born and continues to farm in the Leroy area. He now operates a grain farm of 1800 acres and operates a cow/calf operation just south of Leroy with his wife Pearl and son Cody.

Donavon and Pearl have three children; Whitney, Cody and Matthew, and five grandchildren.

Donavon has been active in the community. He has been on several boards including Leroy minor hockey, Leroy curling club, Midway Co-op, Leroy Credit Union, and the local church board. Donavon was also a delegate for the Saskatchewan Wheat Pool for 12 years.

Donavon has been an APAS Representative for the RM of Leroy since 2007, was elected to the APAS Board of Directors in 2012 and served as Vice President in 2015/2016. Donavon sits on the APAS Livestock committee. He has also represented APAS at a number of beef and livestock conferences and events.

Ryan Scragg was elected to the APAS Board of Directors in 2021 and has been the APAS Representative for the R.M. of Garden River (#490) since 2018.

Born and raised in the Prince Albert area, Ryan farms alongside his father, brother, uncle and cousin.

Together, they farm a wide variety of crops such as wheat, canola, barley, oats, peas, lentils, faba beans and flax.

Ryan lives on his family farm with his partner, Shannon, who works in the agriculture industry and helps on the farm.

Ryan is also the Reeve of the R.M. of Garden River, the board chair for the Conservation Learning Centre, and Saskatchewan Young Ag Entrepreneurs' former chair.

The farm and organizations keep Ryan busy, but when he does have free time, he likes to spend it camping and fishing in the area.

Jeremy Welter was born in the area and raised on the family farm near Kerrobert. He is a fourth-generation farmer, a husband, a father and a small business owner.

Welter has served as the APAS representative for the RM of Mariposa since 2013, and in addition to serving on the APAS Board of Directors for District Six, has also served as chairperson for the association’s Economics & Trade committee.